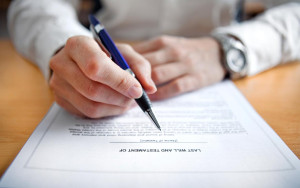 All too often I hear stories of family members who are named successor trustee in a loved one’s trust who do not seek legal advice about their role as trustee and never trigger the mechanism in the trust in order for them to take over as trustee. They instead help their loved one pay bills by having them sign the checks. Sometimes they go to the bank with the loved one and get signing ability on the bank account. This type of informal arrangement can lead to disastrous results.

Most trusts have a specific process for the successor trustee to assume control. The trust should have language providing how the grantor will be determined unable to continue as trustee. Most trusts provide for either one or two doctors to determine that the grantor is incapable of managing his or her financial affairs. Once these doctors statements are obtained, they should be provided to the financial institution along with an acceptance as trustee. This process will officially change from whom the financial institution can take direction. By officially assuming the role of successor trustee, the grantor’s interests are protected from the grantor’s inability to make informed decisions.

Assuming the role of successor trustee also protects the incapacitated grantor from exploitation. If the incapacitated grantor still has signing ability on the trust account, unscrupulous persons can assist the grantor in making withdrawals.  A few years ago a man who had been caring for his mother who had been named as successor trustee but who had not assumed control, came to me after his incapacitated mother was taken to the bank and wrote a counter check for $20,000 to a man who came to her door and told her that she needed a new roof. The man absconded with the money.  If the son had officially assumed control as successor trustee, this exploitation would not have happened.

Another problem that we sometimes see is that other family members may vie for control of the incapacitated grantor. Properly documenting the incapacitated person’s inabilities helps ensure that the person chosen by the grantor at a time that he or she had capacity, maintains control.  I recently fielded a call from a daughter who had been named successor trustee for her mother.  She had never assumed control of the trust pursuant to its terms.  Her brother convinced her to let Mom come to visit in another state.  Now the brother was refusing to send her mother back home, saying that Mom wanted to stay with him.  The brother was able to continue to have the incapacitated mother sign checks but now the successor trustee daughter is unable to get the needed verification from the doctors because she no longer had access to the mother.

The role of trustee is governed by both the trust document and the law. Trustees need to fully understand the role that they are assuming. If needed care for an incapacitated grantor can be provided using income only, a trustee should not have concerns about running out of money. If care cannot be provided only from income, the trustee should seek advice about asset protection planning.